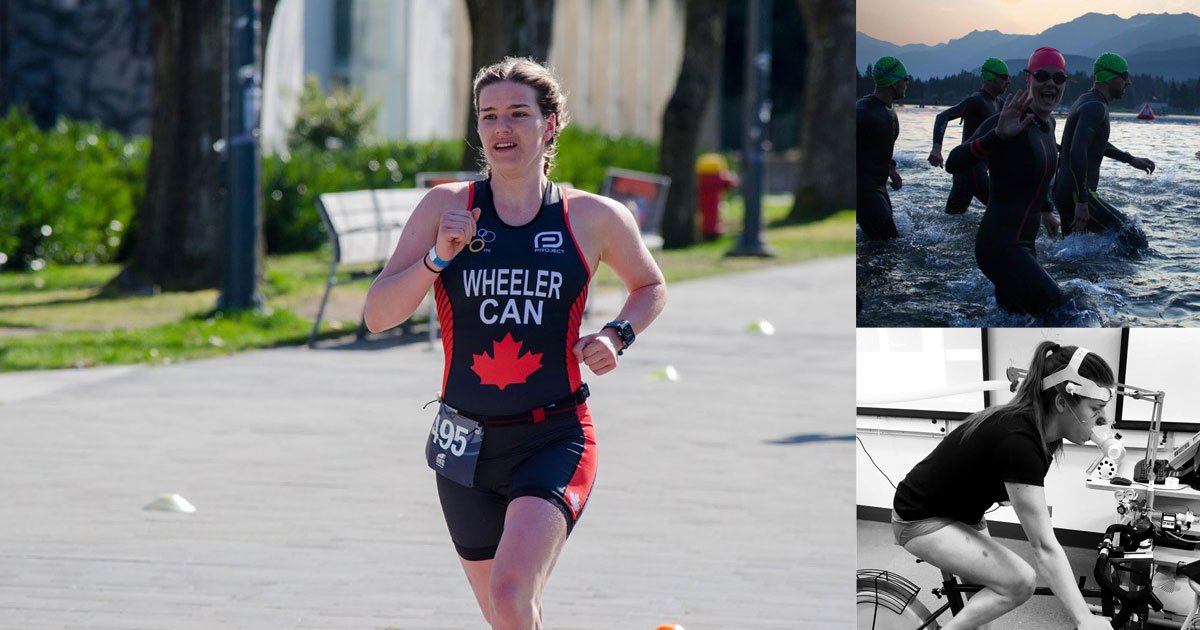 Kiah sat down with us to talk about her passion for triathlon (it’s contagious!), her kinesiology degree, life at the University of Victoria, and racing in Kona last year.

What are you up to in Victoria these days?

I’ve been working on my Kinesiology degree at the University of Victoria – one more year to go with that! I’m also still working as an administrator and president of the UVic Triathlon Club.

This summer I’m taking a month-long course, and then working in youth recreation as part of the Co-op program.

How long have you been with the Triathlon Club?

I joined the admin team in my first semester at UVic, which would have been January 2015. I’ve taken on more responsibilities in the last few years. We’ve had many of our core people graduate so I’m recruiting some new members!

This was a really cool year with the club because our group grew again, and everyone was really into it!

Amazing! And how long have you been doing triathlons?

You have a spreadsheet of your races?

Do you find a lot of overlap between your kinesiology degree and your training?

Yes, it’s definitely been cool! I took a class in advanced nutrition this semester, and was chatting with the professor about how much I wished I’d taken the class before my big Ironman season!

I love being able to relate what I’m learning to my own experiences, and getting to work as a kinesiologist I’ll know the stretches to target specific muscles when they’re sore or injured.

I was recently able to participate in VO2 max testing, which was really interesting! You go to your max effort on a treadmill or a bike (I did both!), and then it tells you your body’s max oxygen carrying capacity.

Do you have specific recovery techniques?

Definitely making sure I get solid nutrition – good food after a workout is so important. It’s hard when you’re training at a high volume and in school though. Meal prep is really helpful! I also roll occasionally, but I’m not very good about stretching!

Me neither! I’m also curious about how you first found triathlon?

I credit my aunt with my introduction to triathlon. When I was around seven years old she raced the Ironman in Penticton, and I just remember the hype! We stayed out all day going to different parts of the course. She ran into some difficulties during the run portion, and it took her longer than we’d expected. All of the other kids fell asleep on the side of the road, but I refused to lose focus until she’d crossed the finish. I just remember thinking ‘this is awesome, and I’m going to do it too!’

In highschool I found a group of friends who also wanted to do triathlon. We started training, and we learned how to swim together.

It was in my graduating year that two of my aunts, including the one who raced the Ironman, invited me to participate in a relay. That was the same year I won an entry to Challenge Penticton. I was 19, which was pretty early, but it felt like something I’d known I was going to do for a long time. It had just been a matter of when, and so I thought ‘I guess this is it!’

Do you have a favourite triathlon?

I’ve always had a spot in my heart for the Penticton races. I grew up there watching people race, and I’m so excited because they’ve just announced that Ironman is returning to Penticton in 2020. I’m super pumped about that! It’s a beautiful course, and it’s really iconic in the triathlon world. There is a lot of history there, and I’m hoping I’ll get to race it with some friends.

And you’ve travelled for triathlon as well, right?

Yes! Last year was a big year for that. It was the most I’ve ever travelled for the sport. I went into the season knowing I wanted to race Kona, and so I registered for two Ironman races. To qualify I needed to come first in my age group.

The first one was in Boulder, Colorado. It was a great road trip opportunity!

The big trip, though, was when I qualified and went to Kona. It was honestly so awesome! I came back and my friends had all been following my race – I have a close friend who also does triathlon and she was tracking my splits to figure out when I would finish!

Has doing triathlon helped you build community at UVic and in Victoria?

Absolutely! Triathlon Club has been awesome! I came to Victoria for my second year of study, and I arrived in January. It was an awkward time to meet people, but I’d just gotten back from travelling and I was feeling really social. I emailed the Tri Club on campus, and then found them at club days. I showed up to their meeting, and I was super enthusiastic!

My main circle of friends throughout my degree has come through being in that club. It’s really great because we instantly share a love of all the things connected to triathlon – exercise, health, being outdoors –  we instantly have that bond.

We can help you get healthy, stay healthy, and perform better.

Get our latest news and articles about physiotherapy, local events and clinic updates in your inbox. Subscribe